Andrew Bowden's legal career at Travers Smith came to an end when he decided to pursue an entirely different calling. In this article he recounts his fascinating journey from being a Travers Smith lawyer to becoming a priest. 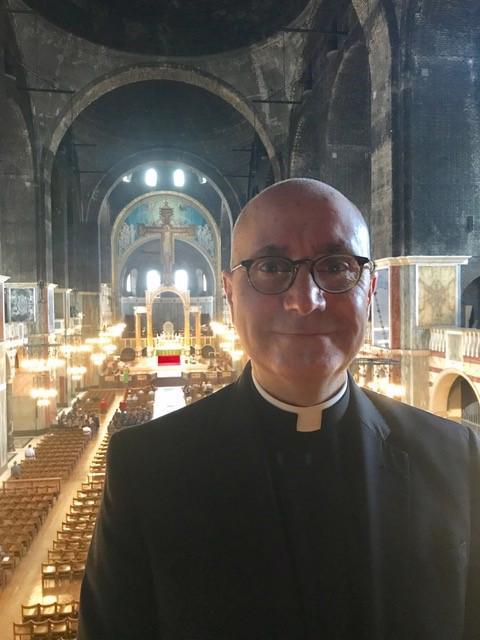 I think it is fair to say that my career history is somewhat unusual. I joined Travers Smith as a trainee in 2002 aged 31. Following an extended gap year and prior to going to university, I tried the life of Benedictine monk. Ultimately I found that I wasn’t really flourishing and I needed to be back in the world so, after four years, I left.

I completed a degree in theology and then found myself having to knuckle down and find a proper job. I did my research and applied for training contracts. Far and away the worst interview I had was my second interview at Travers Smith. I was torn to pieces by a litigation partner (long since left the firm) and I was absolutely convinced that I had failed. I was so surprised when I was offered a place that I think I decided to join Travers Smith out of sheer curiosity. I never regretted that choice.

I qualified into the Tax Department and joined the Funds Group where I stayed until 2013 when I decided that I needed to make a change again. My 11 years at Travers Smith were great. I formed some lasting friendships with really good people. It was exciting to be surrounded by talented and intelligent people working hard to provide a service of which I was proud to be a part. I built up good relationships with clients, which was probably more my forte than technical wizardry, if I’m honest. And the money wasn’t bad either.

However, somehow all of that wasn’t enough. I was restless and began to feel that God was calling me to become a priest. Now I know that last sentence will mean more to some readers than to others, but just to be clear, I wasn’t hearing voices. It was a question of realizing that there was some untapped potential within me, some aspect of my personality and identity that wasn’t finding full expression. I think that everyone wants to be all that they can be, for me being who I really am and being everything that I can be means that I need to be a Catholic priest.

So, after much discussion and a lengthy process of discernment I was accepted as a seminarian (a student for the priesthood) for the Diocese of Westminster. I resigned from my job and sold my house and flew to Rome to begin my studies. I was sad to leave Travers Smith which had been a big part of my life and a little anxious about the risk I was taking but very excited.

I lived at the Venerable English College in Rome which is the oldest English institution outside England dating back to about 1362. And I studied at the Pontifical University of St Thomas Aquinas alongside students for the priesthood from all over the world. I thoroughly enjoyed the studies and the life of a seminarian all of which confirmed my conviction that I was called to the priesthood. In the summer of 2017, I returned to London and on 15 July I was ordained a priest. I was delighted that a number of people from Travers Smith came to the ceremony.

In September I began my first assignment as a chaplain at Westminster Cathedral. A vast neo-Byzantine building dominating a piazza off Victoria Street, Westminster Cathedral is largest Catholic Church building in the country and the seat of the Cardinal Archbishop of Westminster. I am one of eight priests who live and work at the Cathedral sharing the pastoral care of thousands of parishioners and visitors and conducting the eight daily services in addition to many special services and functions. I also have particular responsibility for the winter night shelter for the homeless which the Cathedral operates and providing guidance and instruction to adults who wish to become Catholic.

It may surprise you to know that I draw on many of the same skills that I used as a lawyer at Travers Smith. It is true that I don’t often find reason to consult Tolleys these days but listening, understanding others needs and problems and effective communication are all lawyerly skills that I use everyday as a priest. I explained my calling to the priesthood in terms of unlocking the fullest expression of who I am. In many ways that is a good description of what I try to do as a priest in different ways for the many and varied people who come here to the Cathedral.

Becoming a priest has been a steep learning curve, full of challenges but immensely fulfilling. I look forward to the future with great excitement. I am glad that Travers Smith formed part of my life and I am sure that I will continue to take aspects of that experience into my ministry.