Be transparent: who owns this?

The Government plans to create a register of beneficial ownership information for overseas entities that own or buy UK property or participate in UK central government procurement. The register is intended to help prevent UK property being used in money-laundering schemes and other criminal activities.

In April 2017 the Government issued a call for evidence about how such a register might work, which closed on 15 May. It is currently considering the responses received. This article discusses the Government's proposals and the property industry's reactions to them.

In the Housing White Paper published in February 2017 the Government pledged to "clarify what land is available for new housing, through greater transparency over who owns land and the options held on it". This echoes the Government commitment made at the International Anti-Corruption Summit in London in May 2016 to create a register of ownership of overseas companies that own property in the UK, or enter into contracts with the UK Government. The UK has previously taken various steps in this direction:

Design of the proposed register

The consultation considers various details of the proposed register including, in relation to property ownership, the following aspects:

Views from the real estate industry

The proposals have been generally well received subject to several suggestions for improvement, including:

How will the proposals affect overseas companies that own or buy real estate in the UK? 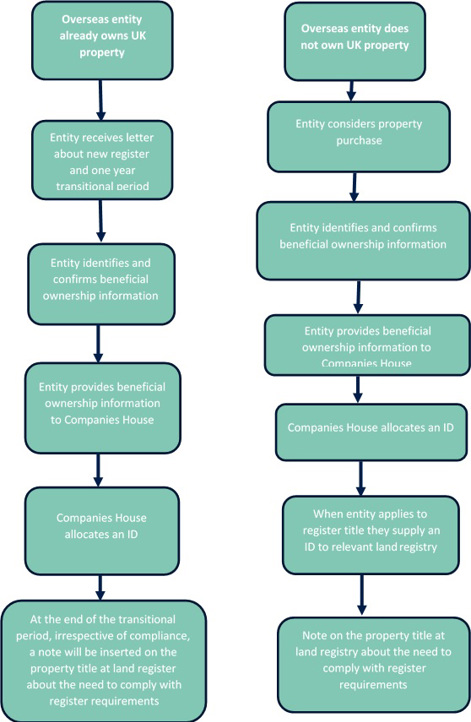 The PSC regime contains protective measures which allows a company or individual to apply to have information about an individual with significant control suppressed if the individual is at risk of violence or intimidation as a result of that information being made public. The Government suggests that the new regime could adopt these safeguards. It is also considering extending this to allow individuals to apply for their information to be withheld if they are or could be at risk of violence or intimidation; if publicly linking the property or entity to the individual will lead to an elevated public safety risk; or in order to protect minors or people with diminished capacity.

The Government wants to ensure that where an entity is not compliant with the register requirements and has defaulted on an existing loan secured on that property, the lender can still enforce its security by repossessing and disposing of the property. It has asked for suggestions as to how this right can be protected for bone fide lenders but not abused by noncompliant owners wishing to dispose of their property interests.

The real estate industry is generally supportive of these proposals, not least because they impose the same rules on overseas investors as are already in place for UK investors. Some of the details need to be fine-tuned but ultimately the register is likely to improve the reputation and efficiency of the UK real estate market.