An interview with Adam Jomeen, Art Lawyer and founder of specialist firm Art Law Studio, who started his legal career at Travers Smith and reflects on his inspiring time spent in the Paris office and journey since. 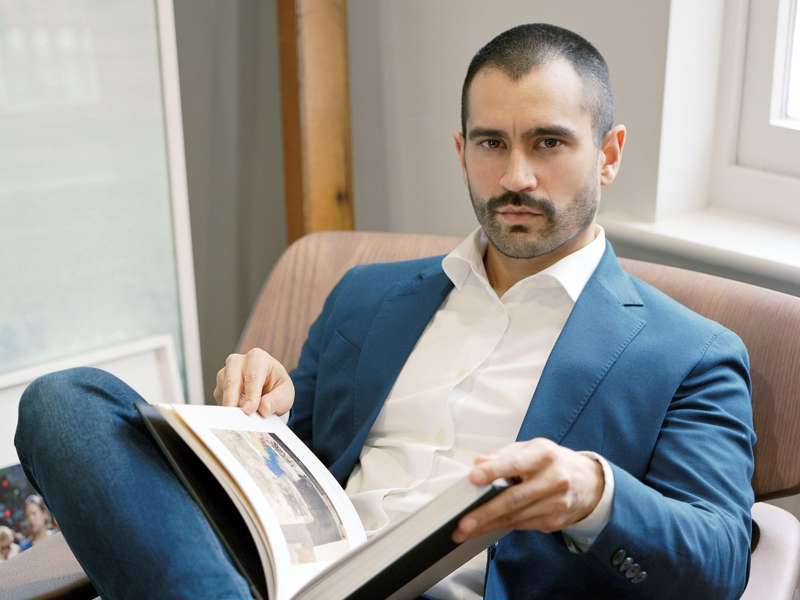 I was born and raised in Yorkshire before reading History at King’s College London and converting to law. I’d heard that Travers Smith had a “type” which I didn’t fit – white, middle to upper class, straight, Southern – but I liked the firm’s profile and was keen to find out for myself. Kathleen Russ interviewed me for an Easter Vacation Scheme and, after a fantastic fortnight, I was delighted to accept a training contract commencing September 2005.

My first seat in the Banking department followed a wonderful summer in Paris studying French and exploring the collections of the D’Orsay, Louvre and Pompidou. It was certainly a hard landing but I enjoyed the pace once I got up to speed. In rapid succession came seats in Employment, Tax and – finally – Corporate, where I chose to qualify. After just a month as an NQ juggling due diligence and corporate reorganisations, I received a blank meeting request from Chris Hale who was then Head of Corporate. Fearing the worst, I was first relieved and then excited when he suggested a move to the firm’s Paris office.  I didn’t hesitate and was on the Eurostar within a fortnight.

Paris revealed the possibility of working outside my jurisdiction – and I liked it. I saw how effective Travers Smith’s network of leading foreign law firms was in practice as I worked with different French firms depending on the expertise required. David Patient sent me on lunches with local counsel when I had more than enough to do in the office; but looking back, they were incredibly valuable at that stage of my career and I grew in confidence as I built relationships, understood key differences between English and French law and learned to ask local counsel the right questions. And watching David and Will Howard move so effortlessly between French and English made the value of foreign languages abundantly clear and the seemingly impossible possible: if they could do it then so could I.

After another busy year back in London under the watchful eyes of Helen Croke and Aaron Stocks, my transactional neural pathways were hard-wired and I wanted to broaden my expertise with some international disputes work. On cue, an opportunity arose in Clyde & Co’s local office in Rio de Janeiro advising insurers on multi-jurisdictional disputes arising from aviation accidents. Brazil’s economy was booming; Clyde & Co were and remain the market leaders in this inherently international arena; and the prospect of working on high-stakes US proceedings excited me (the US being the forum of choice for claimants who have lost relatives in air accidents). As an added bonus, Clyde’s New York office also happens to be in one of my favourite buildings, The Chrysler Building. What I envisaged as a few years in Latin America became seven years; fluent Portuguese and Brazilian residency; and the privilege of travelling widely and working closely with leading local law firms (once again) and Clyde’s colleagues to resolve a variety of complex claims reaching the Brazilian, French and US Supreme Courts amongst others.

With partnership in sight at Clyde & Co, I began to feel a gentle pull back to the UK when my niece arrived in Yorkshire, Brazil impeached its first female President (Dilma Rousseff) and the wheels started to come off Brazil’s remarkable economic run. Having always taken a keen interest in art and the art market, I took a course at Christie’s in 2017 and my ears pricked-up when “Art Law” was mentioned. I’d stumbled upon that elusive combination of expertise and interest and the rest, as they say, is history.

I enrolled on a new LLM programme in Art, Business and Law at Queen Mary University (co-taught by the Institute of Art and Law) to study the body of art-related case law and legislation – principally in the UK and US (who, together with China, account for around 80% of the global art market) – and to revisit the law of contract, agency, copyright and bailment through an art-specific lens. And having discovered that the few UK lawyers with art expertise work for auction houses or City law firms charging City rates, I felt there was space for a specialist art law firm focussed on widening access for artists, advisors, collectors and dealers amongst others. Art Law Studio launched in 2021 and we’re proudly based at Studio Voltaire in Clapham which is one of London’s most exciting and innovative non-profit arts spaces with a vibrant community of artists and curators: visitors are most welcome.

It was art, in fact, that reconnected me to Travers more recently. The firm’s CSR Art Programme – run in partnership with the Serpentine to support art students at the RCA and University of Westminster – is a fantastic initiative in its 7th year and I’m honoured to participate as a judge this year. It’s also a decade since Travers became a Stonewall Diversity Champion which I had pitched to the firm’s Diversity Committee as an associate. Whilst I never felt hindered during my time at Travers on account of my sexuality, there was a striking lack of openly gay role models at the time and I’m delighted that things have changed in that respect. It’s been a real pleasure meeting Chris Edwards, who joined from Stonewall as the firm’s first dedicated ‎Corporate Social Responsibility and Diversity Manager, and to discover the firm’s other CSR initiatives including its work with the Just Like Us charity which pairs young LGBT+ people with openly gay leaders across a variety of sectors.

Compared to the US, art law as a stand-alone practice area is a recent arrival to the UK. I’m often asked how to get into art law by students and younger lawyers and I tend to respond as follows: (1) Take a keen interest in the market, in your own time, because knowledge and passion speak for themselves and no client has the time or energy to teach you how it all works; and (2) As in medicine, you need the fundamentals before you can specialise – so train and qualify with the very best law firm that will hire you (which, at least at the time of writing in February 2022, will not necessarily have an art law practice). I definitely followed the second part of my own advice and am proud to call myself a Travers Smith alum.