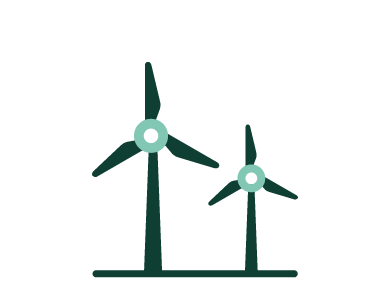 COP 26, the most important climate summit since the 2015 Paris Agreement, is just around the corner. The UK government, which is playing host, desperately wants it to be a success – and needs to show its own continued leadership on climate change if it is to marshal commitments from other countries. A series of important announcements this week are designed to underpin that leadership position, including a long-awaited Net Zero Strategy.

To be fair, the UK already has strong credentials: in 2008, Britain was the first country to set a legally binding climate change mitigation target and, in 2019, was the first major economy to set a net zero target. A number of concrete steps have followed, including another welcome first, announced in 2020, to require all significant economic actors – including many private funds managers – to use international standards to report on their exposure to climate change.

But there is no room for complacency. In its latest report, the Climate Change Committee – an independent, statutory body established by the Climate Change Act 2008 – was harsh in its criticism of the government's more recent record. Progress has, the Committee said, been particularly slow on the measures required to adapt to climate change, as opposed to those that could help to mitigate it. Many remain concerned that the public funds needed to finance the transition to net zero will not be forthcoming.

Public funds are vital, of course, but the government is also expecting to lean heavily on the private sector. The Green Finance Roadmap, also published this week, explains how new financial regulation will underpin the government's efforts.

...Some divergence from the EU taxonomy is expected but there is also a recognition that international alignment is desirable...

A centrepiece of the EU's 2018 Sustainable Finance Action Plan was the creation of a Green Taxonomy. A binary classification system that allows certain economic activities to be classified as "environmentally sustainable" sounds simple enough – and would be a very powerful tool for asset allocators and those in charge of public policy. But the process of creating a taxonomy is immensely complex and politically charged, especially when the interests of 27 individual member states must be balanced. The EU's Taxonomy has been the product of an enormous amount of work by an Expert Group and significant political wrangling. It will become effective in stages, with the rules on the two climate change-related objectives due to come into force in January 2022, and rules on four other environmental objectives operational from January 2023. Even now, the detailed rules are not final, with discussions still ongoing about nuclear energy and natural gas.

For some, the one-size-fits-all approach of the EU taxonomy is inappropriate and does not fully accommodate transition activities, but taxonomies are likely to be a useful tool for investors and, as this chart demonstrates, they are appearing all over the world. 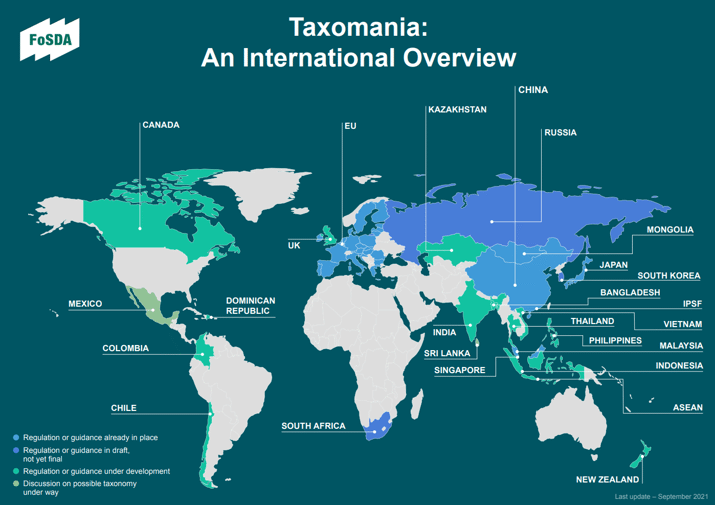 The UK inherited the EU's taxonomy framework, and this week re-affirmed its commitment to create a British version.  Some divergence from the EU taxonomy is expected, to ensure that it is "suitable for the UK market and consistent with UK government policy". But there is also a recognition that international alignment is desirable, and that divergence should be carefully calibrated to ensure the additional costs are proportionate. Advice from the Green Taxonomy Advisory Group (GTAG), established by the government to advise on the UK taxonomy, will be crucial to ensure that the metrics are guided by science.

The GTAG has the body of work created for the EU Taxonomy to build upon, and that will accelerate development of the UK version: the government has already said that the framework will remain the same, and the "technical screening criteria" for the two climate related objectives will be based on the EU drafts. The target is to consult on detailed rules for these two objectives early next year, with legislation to follow "by the end of 2022".

The government can also learn from the EU's mistakes; for example, an issue for many private funds managers is that they will be expected to report on their levels of alignment with the EU Taxonomy before reliable data is available from investee companies. That could skew investment decisions. The UK government says that it will phase disclosure obligations more appropriately under its new "Sustainability Disclosure Requirements" (or SDR) regime (also unveiled, at least in outline, this week).

These and other announcements make clear that the UK still intends to match the EU's ambitions on sustainable finance, even though it will adapt the rules – and, where possible, will follow international standards rather than those developed in Brussels. There is some catching up to do, but there will also be some second-mover advantages.

Visit our COP26 hub, where you can find the latest news, views and key announcements as they are released. 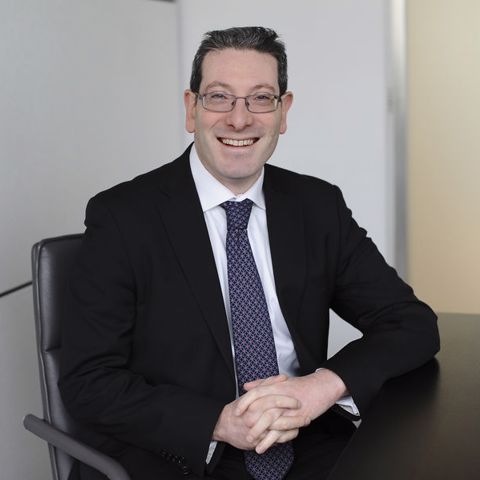