Travers Smith LLP is delighted to announce that it has been named Banking Litigation Team of the Year (alongside Simmons & Simmons) at the inaugural Legal Week Commercial Litigation & Arbitration Awards.

The award recognises the team’s work on the long-running and high-profile Kaupthing case, in which we represented Icelandic lawyer Jóhannes Rúnar Jóhannsson (a member of Kaupthing’s former Winding-up Committee) in a claim brought by property tycoon Robert Tchenguiz against Mr Jóhannsson and Grant Thornton UK LLP. Mr Tchenguiz abandoned his £1 billion claim three days into a 12 week trial, having had his case comprehensively dismantled during opening submissions, and on the day that he was due to face cross-examination. Simmons and Simmons represented Grant Thornton in the proceedings.

The Legal Week Commercial Litigation and Arbitration Awards are a showcase for the most innovative and challenging cases being heard in the UK. They set out to reflect London’s status as one of the leading dispute resolution centres in the world by underlining the depth of talent in the market. The winners were chosen by an independent judging panel made up of senior figures within the dispute resolution community. 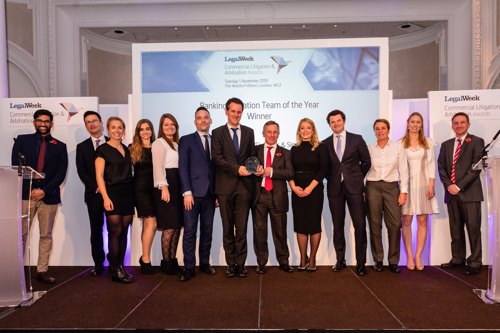